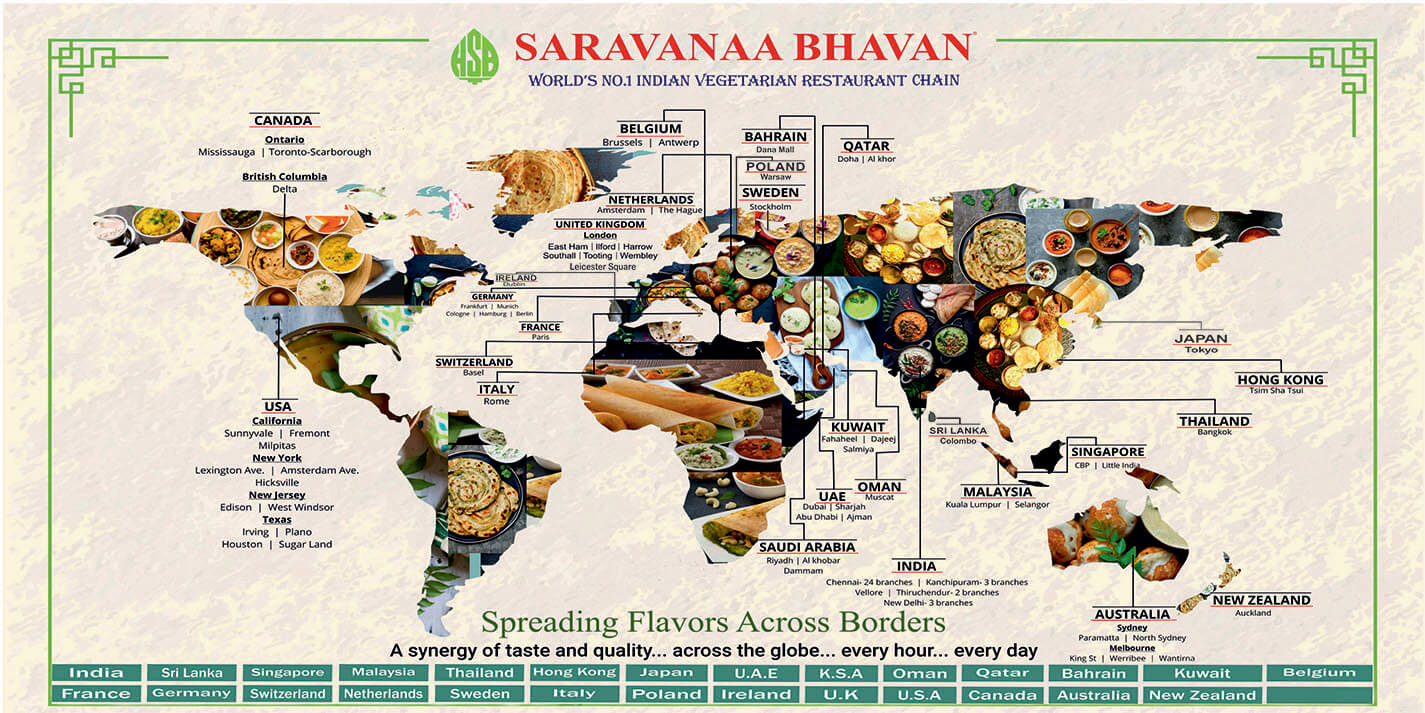 The Indian Cuisine is as diverse as its culture, languages, regions and its climate. Every major region of India brings its own unique dishes and subtle variations to popular dishes. Aromatic Spices are the essence of Indian cuisine.
This combination of bringing different elements of India together, is the unique formula that we follow at Saravanaa Bhavan. Our food's taste, variety & quality is behind the exponential growth of Saravanaa Bhavan globally. Since 1981, each new restaurant added to our network continues to carry the legacy onwards. The trust that our customers have placed in us, has been a massive motivating factor in exploring new destinations. Today, Saravanaa Bhavan is present in over 100 restaurants across the globe, continuing to grow successfully.

"There is no sincerer love than the love of food." - George Bernard Shaw

We, here at Hotel Saravanaa Bhavan, agree with Mr. Shaw. People all over the world share one genuine interest and that is sheer love and admiration for food. In order to cater to this global interest, Hotel Saravanaa Bhavan, one of the largest chains of Indian vegetarian restaurants, brings its own delectable cuisine and artful variations of popular and traditional Indian dishes.

Saravanaa Bhavan is a vegetarian amalgamation of South India. It has its own distinctive legacy. This legacy came into existence with P. Rajagopal who started his journey with a tiny grocery shop on the outskirts of Chennai. In 1992, Rajagopal travelled to Singapore where he drew his inspiration from multinational fast food joints like McDonald's and used them as models for his own vision.

By 1990s, Saravanaa Bhavan was found in every nook and corner of Chennai. In 2000, Saravana Bhavan added another feather in its cap by opening a franchise in Dubai. It eventually expanded to Paris, Frankfurt, London, New York City, Dallas, Toronto, Stockholm, Doha and Auckland. While the restaurants gained popularity among non-Indians, they were a huge hit amongst the South Asian population. It is a high volume, low margin venture which is labour-intensive. Saravanaa Bhavan sends workers from India to work in their foreign branches while overseas outlets are run by franchisees and that is exactly how the legacy of Saravanaa Bhavan continues to date.

The corpus of Indian cuisine is incredibly vast and Saravanaa Bhavan’s dedication remains true to its vision of bringing authentic, flavourful and regional Indian cuisine to everyone who loves good food.

Now, there are over 100 Saravanaa Bhavan restaurants successfully running across the globe.